Back in March, the astronomy crowd was buzzing about a possible”naked-eye” comet expected in late May 2020.  Comet C/2019 Y4 (ATLAS) was first detected at the tail end of December as a very dim magnitude 19.6 object and by mid-March it had brighten to an easy telescope target magnitude of 8. Those not familiar with the magnitude scale, going from 19.6 to 8 is not a doubling in brightness, but around a 4000 times increase!

That dramatic increase in brightness help fuel the hype for the Great Comet of 2020, and there were two other factors that got people excited:

Well all that went south when the comet’s breakup was observed in late March after peaking momentarily at magnitude 7. It began to dim, along with any hopes of a Great Comet repeat. Below is a graph showing the the original (grey line) and revised (red) comet brightness forecast (dots being observed measurements) on this chart created by Seiichi Yoshida (comet@aerith.net)

Comet C/2019 Y4 is expected to make its closest approach to the sun on May 31st, however most experts believe it will disappear (disintegrate) before that date.  Seeing that I had a small window of opportunity to capture the comet I decided to try my luck last Saturday evening.

Below is an extremely processed (and ugly) image that I got by combining 25 photos (15 seconds each at ISO 3200) using my Skywatcher 80ED scope. The photo just about makes out the distinctive blue-green hue and elongated shape of a comet. It is around magnitude 10, very diffuse and about 147 million km away from us the day this photo was taken. 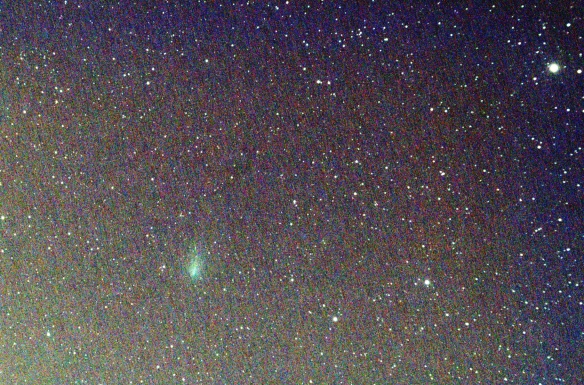 I pushed the image processing so hard that I was able to pick up faint magnitude 13 galaxies!

On to the next comet!