The second Full Moon in a month is generally called a Blue Moon. And yes the old saying “once in a Blue Moon” is in reference to this rare event.  Well… if you consider every 2 to 3 years rare. However this one will be extra special because it won’t be blue at all!  It’ll be blood-red because we’ll have a lunar eclipse on our hands! 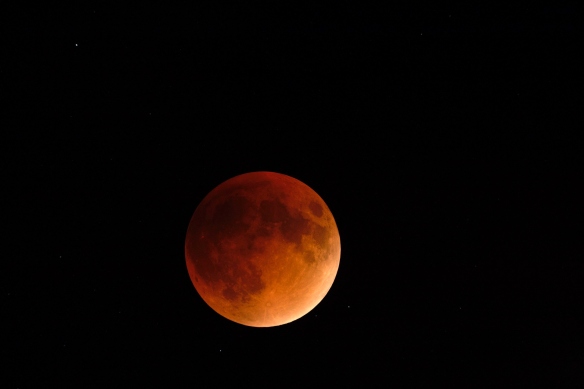 The lunar eclipse will be visible from most of North America, but people out West will be better placed to see it.  In the East, the we’ll only get a partial eclipse as the moon sets in the early morning on Wednesday the January 31st around 6:48am EST.

If you do plan to photograph a lunar eclipse, a tripod is strongly advised, and if you are using a telescope, an equatorial mount is required. The above photo is a single frame at 2.5 second exposure and ISO400 with a Skywatcher 80ED. Yes those are a few stars popping into view during the eclipse.