It wasn’t easy but on Friday the weather cooperated and I was able to capture a glimpse of comet 45P/Honda-Mrkos-Pajdusakova.  That’s if you consider -10°C outside temperature to set-up a telescope and operate a laptop cooperation from Mother Nature.

In my previous post I gave myself a 2-day challenge to capture this comet as it was essentially the last few days at a decent magnitude 7 brightness before becoming non-observable as it swings around the sun over the coming weeks.  And when it returns to the northern latitude sky in mid-to-late February it will be dimer at magnitude 10.  In the image below, I labeled some of the brighter stars with their visual magnitude as reported by the Tycho-2 catalog. 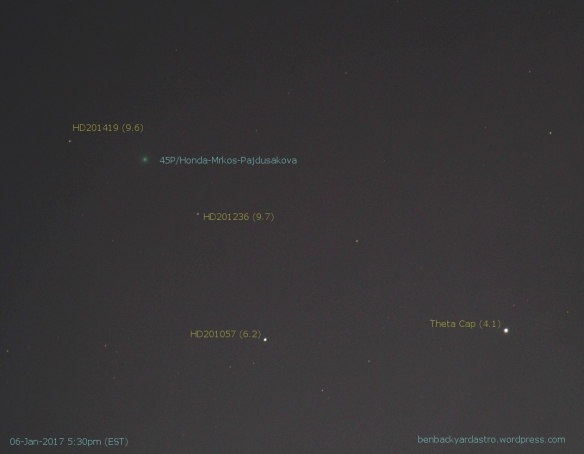 I had a very small window of about 30 minutes to make any observation and photograph it.  The challenge started with setting up without polar alignment; the sky was still too bright to locate Polaris,  and instead relied on the position of Venus to align the mount.  As it was still twilight, I was limited to short exposures to keep the histogram on the left half on the camera and to make out a star from the background sky.  I actually started at ISO 400 with only 1 second exposure while adjusting the focus around Theta Cap (magnitude 4).  And as the minutes ticked by I was able to slowly increase my exposure as the twilight darkness permitted.  With neighboring trees, and rooftops coming into view I had to grab as many frames as possible. In the end I got 14 images with 6 seconds exposure at ISO 800 before calling it quits.

With such short exposures no chance of capturing any comet tail, but the green halo is unmistakable comet.

I hope to capture a few more comets this year.