Simply setting up a camera to take a series of images of the night sky can pick up a lot more than a few stars. 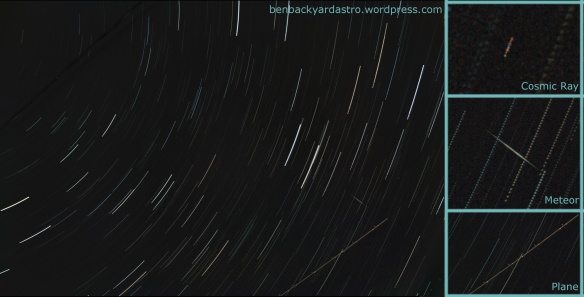 Meteors are also somewhat of a common occurrence.  These are easily recognized by their characteristic increasing than decreasing brightness as they burn up in the upper atmosphere. The meteor in the image above is from the Geminid shower.

The last artifact comes for outside our solar system, it is cosmic rays.  The CCD or CMOS sensor of your camera works by performing an electric read-out of photons captured by the lens.  Cosmic rays are high-energy sub-atomic particles that have traveled through space and managed to make it through the atmosphere down to us.  The one in the photo above just happens to hit my camera sensor.  As the near light-speed sub-atomic particle smashes into atoms on the sensor it looses energy, freeing up electrons which register as “light” by the CCD.  Most of the time the cosmic ray will hit the sensor straight on,  but sometimes it impacts at a shallow angle and causes a series of pixels to “light” up, as in the photo above.

Take time to examine your photos, you never know what surprises you may find.